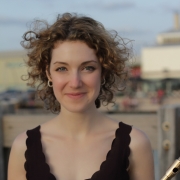 Teacher #1776 - Available
My role is to inspire my students musically and help them develop a critical thinking which will not only help them in the lessons but in life.

Growing up in a small town without a regular flute teacher made me develop the tools to teach myself. Later, when I finally found my first flute mentor, I understood and appreciated, even more, the importance of a great teacher. In my 10 years of experience of teaching the flute to all ages and levels, I’m still convinced that my role as a teacher should be to inspire my students musically and help them develop a critical thinking which will not only help them in the lessons but in life.