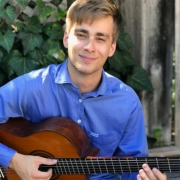 Gabriel discovered his passion for teacher when he was a teenager, and ever since, he’s always looking for new creatives methods to transmit his passion for guitar. Gabriel has already taught in many music school, and has very strong affinities with children and teenagers.

Gabriel’s passion for the guitar started when he was only 6 years old. He studied with the best teachers in France, and got his diploma from the French conservatory of Clermont-Ferrand at the age of 18. Shortly after, he moved in Montreal were he studied at McGill university and obtained a licentiate in classical music performance in 2018.

Gabriel his currently pursuing his concertist career, and plays regularly in solo and duo in France, Canada, and the united-states.