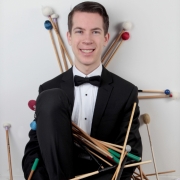 Teacher #1939 - Available
I feel very lucky to have had wonderful, ambitious students over the past 9 years that I have been teaching.

I feel very lucky to have had wonderful, ambitious students over the past 9 years that I have been teaching. My philosophy is that I first want to figure out what the goals are from each student. Do they want to be in a band, do they have a performance coming up, are there certain pieces or songs they want to learn or do they simple just want to learn drums from scratch. After deciding on a goal and a timeline, I use technique exercises, studies and various other method book to help them achieve their goals.

After graduating from Canterbury Arts High School in Ottawa, ON, I began my undergraduate studies at the University of Ottawa studying primarily with Jon Wade of the NAC Orchestra. After 2 years, I transferred to the Glenn Gould School of the Royal Conservatory of Music in Toronto where I graduated two years later with a Performance Diploma with honours. In addition to these two schools, I truly think I received most of my education from the 5 years I was a member of the National Youth Orchestra of Canada.

I am fortunate to have received some awards and recognitions in my musical career so far and they are as follows:
National Youth Orchestra of Canada Ambassador
Award of Excellence from the 2016 National Youth Orchestra of Canada
The Barbara and Patrick Keenan Foundation Scholarship from the Glenn Gould School The Piccolo Prix from the National Arts Centre Bursary Competition: 2015
“Most Outstanding Section” (Canterbury Percussion) at Musicfest Canada: 2012

As a teacher, I have taught privately in my own home-studios for the past 9 years. In addition, I have been a member of the teaching faculty at both the Royal Conservatory of Music in Toronto and the Conservatory of Performing Arts in Regina, SK. I am blessed to have had a number of teachers and mentors who have helped guide me through my musical life choices and I hope to be the same role model and aide to any of my current or future students. After graduating from the Glenn Gould School, I was offered a job as Principal Percussionist of the Regina Symphony Orchestra which I held for two seasons. During those two years, I was able to play with many other wonderful canadian orchestra such as being guest principal of the Canadian Opera Company orchestra, the Winnipeg, Ottawa, Thunder Bay, Kingston Orchestra just to name a few.