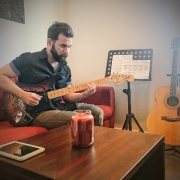 Teacher #2024 - Available
My goal is to help develop or rekindle your passion for music that can last a lifetime.

I provide an energetic, modern approach to guitar instruction tailored to meet your musical tastes and skill level. My goal is to help develop or rekindle your passion for music that can last a lifetime. We will focus on aspects of music that will get you quickly playing your favourite songs with other musicians with a strong emphasis on rhythm and timing. For advanced and intermediate musicians I can challenge you to develop your speed and fretboard knowledge so you can become a stronger lead player. I can also help with song writing and home recording to further share your gift with others.

I began playing the guitar at age 11 under the influence of my father and practiced up to 8 hours a day. By age 13 I was performing at pool halls and nearby coffee shops with local cover bands. My first job was teaching guitar at a neighbourhood music academy 3 nights a week after school. Shortly after graduating high school I recorded my first album and toured across Canada and the United States with my band The Kindred. In 2011 The Kindred had caught the attention of Sumerian Records (Los Angeles) and we signed our first record contract. We then began opening for large audiences across North America alongside acts such as Protest the Hero, Periphery and Architects. The Kindred recorded 2 more albums over the next 5 years. During this time I was teaching guitar lessons for fans before shows in the dressing room. Shortly after disbanding in 2017 I began doing session work for country artist Damien Maze (Sony) and R&B/funk artist Mik Laxton (universal). I currently teach full time and have had the pleasure of teaching a large repertoire of music to students of all ages.