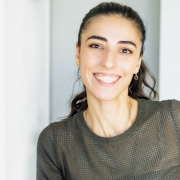 Teacher #2229 - Available
I want to equip my students with the tools to unlock their voice.

I want to equip my students with the tools to unlock their voice. You will always have me in your corner - but at the end of the day you are the one who will be alone on the stage/in the boardroom/audition room – and you need to be the one who understands your voice.

To get there, our sessions are full of student-led learning. My goal is to make you think and explore your voice! I believe that an efficient and free sound is found with lots of fun and intense exploration. You guide lessons and pick repertoire and I am here to encourage relaxation, exploration, healthy vocal and body use and a commitment to creating sound and communicating that is deeper than just “neck up.”

I offer my students a safe space to explore coupled with patience, humour, and a genuine commitment to my student’s personal voice!

Learning how to use my voice was a long – and sometimes painful – process! The ease of singing that I witnessed with my colleagues in school didn’t come naturally to me. That question and frustration – how do I find a way to use my voice that is healthy and free – started a journey that has continued to this day. I’ve gone from singing in choirs to opera, to indie music, to teaching voice, to making crazy sounds as a voice actor in video games and animation. Throughout it all I’ve spoken, yelled, screamed, cried, sang, belted, and growled my way through sessions – singing a classical score one day, being a combat soldier in a video game the next. I credit my vocal longevity, power (and ability to survive hours long vocally stressful sessions) to my singing training and curiosity of the healthful habits of the human voice.

My journey has been a long and varied one! I started out studying voice privately under the RCM from childhood to the end of high school. After that, I graduated from York University BFA with a degree in classical vocal performance. From there I studied as an opera singer and teacher under many, many amazing singers. I've sung as a backing singer for rock singers, I was the front woman to an indie rock band, I've sung opera with the RCM, Toronto City Opera, Summer Opera Lyric Theatre. I studied under Canadas foremost Butterfly - Maria Pellegrini - in Ottawa. After that, I travelled to Germany and Italy and studied under wonderful musicians (Nadine Secunde, Dr. Siebald). I came back to Canada and continued my studies in theatre and acting with Theatre Rusticle and am constantly taking new classes in acting, improv and voiceover. I have been very interested in figuring out the contemporary sound (it IS a different technique!) and have worked on my musical theatre and contemporary singing for the past few years. I adore learning and am constantly updating my teaching education - most recently having completed the Vocal Pedagogy "Un-Degree" with UofT's Dr. Shannon Coates. Experience-wise - I have have been teaching voice since 2008 - first in Brampton, then Toronto, then Ottawa, and finally online!