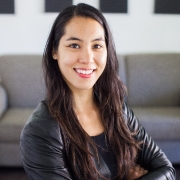 Teacher #2272 - Available
My approach is to challenge students to be their best and be themselves.

I create custom lessons for each student based on their level, goals and experience. In the first lesson I like to get to know my students and their interests so I can better teach them.

Students may have the opportunity to record songs with me when they advance. My approach is to challenge students to be their best and be themselves. I bring positivity and humor into my studio and encourage students to think creatively.

I help students work on songs, technique, warmups, performance, ear training, demo recording, lyric writing and more - in inspiring ways. I’ve played and written a wide variety styles of music - pop, rock, hip hop, R&B, blues, jazz, classical- and can help you do the same. I look forward to learning more about you!

I received a Bachelor of Arts in Music (Hons), Business (Hons), and Communications from the University of Waterloo. I also hold post-graduate certificates in Music Business and Business, and am pursuing a Masters in Music. I started studying Voice (Classical, Pop and Jazz) in 2011, primarily with award-winning instructors Charlena Rusel and Micah Barnes, and began teaching Contemporary Voice in 2014.

I have won several songwriting and performing competitions including being the first female to win Battle of the Bands, Waterloo Region in 2017. Some of my original songs have played on radio shows like CBC Radio Canada, JXFM Radio Tokyo, and KVHT Hit XM Las Vegas. I was a top ranking Artist-in-Residence at Artscape Daniel’s Launchpad Toronto, teaching and creating music full-time alongside the best in the industry. In 2020 I was appointed Head Record Producer at Penthouse Studios in downtown Toronto. I was recognized by Spotify in 2019 and 2021 as a top music curator, being well-versed in a vast array of music with a specialty in Popular.

I’ve been in the practice of songwriting since 2008 and recording/production since 2010. I’ve formally studied both in university and received hands-on training placements in the industry under Artscape Audio Engineers.