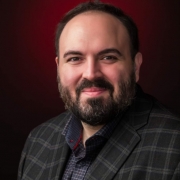 Teacher #2575 - Available
Singing is a vital component to bring joy, peace and focus to the soul.

Singing is a vital component to bring joy, peace and focus to the soul. When I began high school, motivation was not a concept I was well aquainted with. Back then life was not as exciting, until I discovered my gift in singing. My high school music teacher singled me out and asked me to sing "O Canada" in front of my high school of 2000 people! Once I hit the high note at the end of the anthem, the whole school burst in to cheers. I went from being the quiet guy at the back of the class, to singing in shows, recitals and concerts. Even though singing is not about the fame, the size of crowds, it empowers you to use your mind, soul and body to bring a gift to people to get them out of the state they are in. Many people who come to see performances have stressful jobs, they maybe going through a difficult season of depression or hurt; by hearing you sing from your heart, the beauty of your gift can take those people for a moment out of their pain, out of their stress or worries and just enjoy the wonderful creative features of the human mind and instrument. Nothing can reach the soul better than the human voice. Athletes priming for the performance of their life often turn to music in the moments before their victory, Surgeons often play classical music, rock or even opera while prepping for a life saving operation.

Progress is the most fundamental need that drives human existence forward, and the joy and satisfaction at seeing a gift like singing thrive and flourish and progress fulfills our most innate desire and need.

After successful auditions I was asked by managers in Berlin to prepare the roles of Wagner's Siegfried and Calaf from Puccini's Turandot. I am currently preparing both roles under the tutelage of San Francisco Opera Music Head and The Merola Opera Program alumni Mark Morash. I began my professional studies in Italy under the direction of renowned Italian Bass-Baritone Francesco Facini at Opera Stage in Lucca, under the recommendation of Facini, I was then was afforded the opportunity to study in the United States with long-time Aspen Music Festival Professor Michael Trimble at the Trimble Vocal Institution. I hold a bachelor's degree where I studied Music and Political Science from Western University. While at Western I studied with Torin Chiles, Theodore Baerg and sang the role of Francis the Canadian Opera Beatrice Chancey under the direction of John Hess. I obtained my accreditation with the National Association of Teachers of Singing (NATS) in 2015.

-Performed the role of Un Venditore in Puccini's Il Tabarro with Opera Niagara under the direction of Dr. Maria Vetere and Metropolitan Opera Star Aprile MIllo -Advanced training in the Wagner Repertoire as a helden tenor with San Francisco Opera Music Head Mark Morash. -Trained in Italy, the United States and Currently preparing roles for performances in Germany -I have a Pre-Health Science Certification from Conestoga College where I studied anatomy and physiology extensively, I bring that knowledge into my teaching of the human voice. -Mastered the Crooning/Sinatra Style of singing and performed with Jazz bands over a period of 3 years.