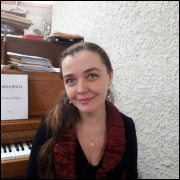 Teacher #2700 - Available
My goal is to instill a fine sense of music appreciation, while at the same time, teaching students about the technical aspects of music.

Throughout my teaching career, I have been driven to help students achieve their very best. My goal is to instill a fine sense of music appreciation, while at the same time, teaching students about the technical aspects of music.

As a teacher, I am committed to providing the best teaching possible by giving my students a great start in their music journey through emphasizing the correct foundation for developing basic music skills.

During our one-on-one music classes, the teacher and the student set high-standards in preparing technique, repertoire, ear training, musical creativity, stage experience and a fine sense of music appreciation.

Even if you or your child never plays a note again after lessons end, you will not have wasted your money and time if you have learned how to allow Music to make your Life better and more fulfilling.

I strongly believe that Music has the power to change lives – to enhance the social, cultural and spiritual lives of people, and serve as a profound medium of personal expression.

* Preparation for the Royal Conservatory of Music or Canada Conservatory exams from Grade 1 to ARCT (Piano, Rudiments of Theory, Composition) * Well-established methods, combining European tradition with North-American innovation * Coaching for auditions, competitions & festivals. Studio recitals. * Piano accompaniment for voice, strings, woodwinds, brass. I have been very fortunate to educate a very diverse group of elementary, middle and high school, as well as university students, teaching individual classes, small group or large classes (up to 60 students). Under my guidance, my students have achieved hundreds of awards, scholarships, trophies and gold medals at provincial and national levels, such us the Winnipeg Music Festival, Kiwanis Music Festival of London, Stratford, Toronto, Woodstock, St. Thomas, Young Artist Competition, Rotary Festival, Tauber Music Festival, or the prestigious Canadian Music Competition, as well as the highest honors from the Royal Conservatory of Music and Conservatory Canada for their piano and theory examinations.