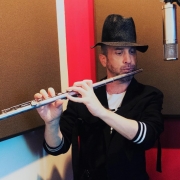 Teacher #555 - Available
My objective when teaching is to teach you beyond just playing the notes, but the story you can tell with them.

My objective when teaching is to teach you beyond just playing the notes, but the story you can tell with them.

Hi! I'm here to teach you how to play pop music and how to play in collaboration with others whether it's on stage or in your backyard. I'm great with keeping interest in kids, but also have experience with adults. Here is a little biographical information on me: I am an Amazon best-selling and iTunes Top 100 charting artist transforming the flute from a background instrument to a serious soul voice in R&B and hip-hop. My goal, even from an early age, was to create a distinct and instantly identifiable flute sound with enough presence to command attention—just like an R&B singer’s voice. My cover of Warren G‘s “Regulate” was featured in XXL Magazine’s “20 Covers of Hip-Hop Songs Using Instruments.” And my cover of Kanye West‘s “Slow Jamz” in Mashable’s “14 Bizzarly Awesome Rap Cover Videos.” Over my two decades as a professional musician, I have built what would be considered an impressive online following for any independent artist. My YouTube channel has exceeded 1.5 million views. For a solo flute player it’s unprecedented. My professionally produced discography includes two full albums, an EP, and eight stand-alone singles. My 2020 EP was touted by popular music critique site Divide and Conquer as “a blend of sounds that creates a soundscape that listeners can easily get lost in. Not merely an instrumental album, Jazzy AF sees the artist mixing genres and creating a new sound. Kearns’ command of the instrument is unmistakable.” The release also hit #1 chart position on renowned Jazziz Magazine’s listener-voted new release chart “Inside Track.”