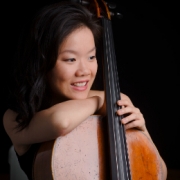 Teacher #593 - Full Studio
Whether it is to build confidence, improve posture and vitality, or simply to discover the intrinsic wonders of music making through the beautiful sound of the cello, playing this instrument will surely bring well-being to you and others around you.

Zhou abides by a learning process enabling the student to acquire a solid foundation for a globalizing technical mastery of the instrument.

This rigorous part of the lesson is implemented in natural and organic ways, tailored to each student needs. The whole is crowned by an exploration of different musical styles from the rich repertoire for the cello.

In addition, collaborations with piano and between two cellos will be provided during the lessons. Students who are interested will be invited to participate in class concerts.

Hailing as the third generation of a family of musicians, Zhou completes in summer 2013 a Master of Music from the University of Montreal under the tutelage of Carole Sirois and the late Yuli Turovsky (founder of the chamber orchestra I Musici de Montreal). Previously, she received her Bachelor of Music from the Schulich School of Music at McGill University. Her academic path also led her to the Glenn Gould School in Toronto and the University of Calgary where she had the unique opportunity to work and perform along the sides of legendary cellist Lynn Harrell. Twice national finalist at the Canadian Music Competition, Zhou plays the Lalo Concerto with the Orchestre symphonique de Pierre Laporte at the age of 14.

Dividing her time between performing and teaching, Zhou participated, among others, in the International Festival of the Domaine Forget, in Scotia Music Festival, Morningside Music Bridge in Shanghai, China and Wiener Musikseminar in Vienna, Austria.

In fall 2013, Zhou took part of the prestigious Institute for Orchestral Studies at the National Arts Centre in Ottawa under the direction of Pinchas Zukerman. She joins the historic tour of concerts and educational activities of the NAC Orchestra in China. In addition, her expertise brought her to perform alongside members from the Orchestre Symphonique de Québec, the Nova Scotia Symphony and the San Francisco Symphony.